Home > Types Of Dentist > Making a Complaint Against a Dentist

Making a Complaint Against a Dentist 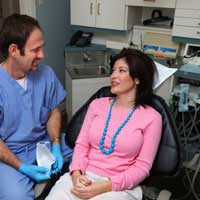 While most dentists in the UK are well trained and provide an excellent service, there may still be occasions where a dentist doesn't provide the standard of care that you expect and deserve. In these instances, you may want to consider making a complaint against your dentist.

But, how do you go about making the complaint? It will depend, in part, on whether you are under a private dentist or an NHS dentist. Also, the nature of the complaint itself will be relevant to what route you take when you lodge a complaint.

If you have a complaint and you want to take a relatively formal route, you should usually make the complaint within approximately six months of the event. Typically, the first part will be a localised resolution where you complain directly to the dentist who treated you.

The idea is to raise concerns directly with the source, which is generally preferable to bringing in a third party if it can be resolved directly with the dentist. This can save a lot of time and stress if it's resolved at the local level rather than going to the next stage. If you're not happy with how your complaint is handled, you can then contact the Healthcare Commission to obtain an independent review of your issue.

If you still remain unhappy with how the Healthcare Commission handles your complaint, you then have the option to contact the Health Service Ombudsman. As mentioned though, it's ideal to try to resolve the issue with your dentist locally first.

If you want to complain about an incident relating to a private dental practice, then you should ideally still try to resolve the issue with the source – the dentist or staff where it occurred.

However, if that isn't satisfactory, you can complain to the General Dental Council (GDC), which is a regulatory body that governs dentists in Britain. Through the dental complaints route, you can formally complain about a dentist in private practice.

A resolution might involve an apology from the dentist and practice, refund of costs you paid or some sort of additional service or payment to remedy the situation. The aim is to resolve the complaint as transparently and efficiently as possible.

There are more complaints than ever against dentists in Britain, which is thought to be related, in part, to the rising dentist fees. The most common complaints are poorly done treatment, fraud or excessive fees. Other complaints relate to badly done root canals or broken crowns and bridges. In fact, there are twice as many claims on British dentists as there are on British doctors.

The Best Standards of Care

If you feel you haven't received the best standards of care from your dentist, then it's important to take action, first with the dental practice itself and then formally if this isn't satisfactory.

The only way that a dental practice can improve its service is through honest feedback and if they are not performing to the best standard, it's important for members of the public to complain appropriately. In turn, we can all benefit from better standards of dental care.

How to Get Started in a Dentistry Career