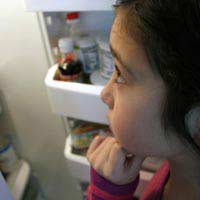 We all know that high-sugar foods and beverages such as soda or chocolate can increase our risk of tooth decay. But would you be surprised to learn that the time of day you eat matters as well? Night eaters are more likely to suffer from tooth loss.

Not only that, but it is not just sugary foods that promote decay and tooth loss. Any foods eaten around this late hour can significantly raise your risk of tooth loss. If you are a nocturnal eater, find out how you can minimise the damage from your late night meals and snacks.

Types of Food and Tooth Loss

According to a recent study, it does not even matter what kind of food you consume at night. Any food eaten at night will increase the risk of tooth loss. Researchers and dentists think this is because saliva flow is lower at night. Saliva has a protective effect on teeth. It helps to remove food particles from the mouth and to some degree, it also buffers against bacteria.

When people eat at night, their reduced saliva flow means that the acidic effect of food is magnified. That sandwich or pasta you ate last night could potentially have been less harmful if you had simply eaten it during the day.

Results of an Eating and Dental Health Study

In the study, researchers looked at quite a large sample. More than two thousand men and women aged thirty to sixty took part in the study. Their health was assessed through questions that investigated oral health, eating habits and also their general health.

Nearly ten percent of participants were nocturnal eaters, meaning they take in a quarter or more of their daily food intake at night. These people would also awaken at night on occasion and have a snack.

Researchers found that even after removing interfering factors such as people smoking or eating a lot of sugar, nocturnal eaters lost more teeth later on in the study. This was in comparison to those who were not nocturnal eaters and consumed food more evenly throughout the day rather than at night after their evening meal.

One important part of this study is that it suggests dentists should be screening their patients to find out which ones are nocturnal eaters. While it may seem invasive to be questioned about your eating habits, it could mean reducing your risk of tooth loss later on in life.

Recommendations for people who are nocturnal eaters – other than modifying their eating habits – are to pay special attention to brushing and oral hygiene. If you are one of these nocturnal eaters, make sure you brush teeth at least twice a day using a fluoride toothpaste.

Also, ensure that you make one brushing session happen right before you head to bed. Another recommendation is to only drink water for a minimum of one hour before going to bed. Combined with good brushing habits, you can minimise the damage from late-night snacking and meals.