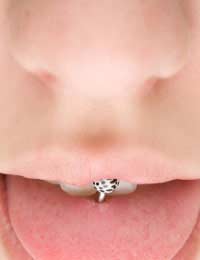 Tongue piercings continue to be a big trend, especially in young people. While they aren’t to the tastes of every individual – especially parents of teenagers who have them – they have been viewed as relatively harmless.

Evidence is emerging now, however, that tongue piercings can cause numerous issues to dental health, including tooth gaps and chipped teeth. Several studies are aligned with this finding and suggest that those who are considering a tongue piercing should think very carefully about the decision.

The best way to prevent problems is to avoid getting a tongue piercing in the first place. But if you do make the choice, preventative measures are important to maintain good oral health.

One case study involved a woman in her mid-twenties, who had received a tongue piercing seven years prior. As many people with tongue piercings commonly do, she ‘played’ with the piercing quite frequently. She would push the silver stud on the tongue piercing up between her top front teeth.

The result was that over time, a gap was created that had not been there prior to the piercing. To correct the gap, she then had to undergo orthodontist work by having braces placed on her teeth, which pushed her teeth back together at the front.

Dangers of ‘Playing’ With a Tongue Piercing

In another study, researchers looked at teenagers who had tongue piercings. They found that a high percentage of the teenagers would regularly push the stud of the barbell up and against their front teeth, leading to gaps between the upper two front teeth.

Gaps and Other Problems

Gaps still remain only one of many dental problems resulting from a tongue piercing. Other issues include chipped or fractured teeth, infection and also damage to gums. In other studies, it has been found that the stud on the piercing can rub against gums, causing them to recede and leaving the sensitive tooth exposed to bacteria.

While the overall recommendation is to avoid getting a tongue piercing in the first place, if you do choose to get one there are some safety measures you can take to help protect your oral health. It is strongly recommended that you get consistent checkups at the dentist to look for the signs of receding gums, chips and the beginnings of a gap in teeth.

Mouth guards can be worn at night to prevent the stud pressing and resting against the gums. This can help to prevent receding gums that are caused by prolonged pressure at night. Tongue piercings remain a popular trend but as they do cause problems, if you choose to get one make sure you continue with frequent dental checkups.